The joy of 'spoken word poetry'

... as they call it now. (I grew up calling it performance poetry, but same thing.)

Last night was ... um, must be the 4th Poets Out Loud event in Murwillumbah, and a great night it was. As always, we had a diverse group of poets from within Murwillumbah and also from surrounding towns and cities in both Northern Rivers (NSW) and southern Queensland – and a wonderfully receptive, enthusiastic audience. I am still full of exuberance from being exposed to poetry, and sharing one of my own, in my favourite way. (And I do love to let my hair down, clap loudly and yell, 'Yay!' for my favourite performances.)

When I arrived, the man on reception told me that (well-known Northern Rivers poet) Janie Treasure had recently shared my Volkswagen poem at a reading of women poets in Lismore. 'It went down well,' he told me. 'It always does,' I said.

Janie was at Poets Out Loud last night, so I was able to thank her. 'I adore that poem!' she said, adding that she reads it often, and giving me a huge hug.

It's probably always going to be my most famous poem, as it was anthologised years ago in two very mainstream anthologies for schoolchildren. So, as I have been meaning for some time to record some of my pieces on Soundcloud, I have now done so for this poem and added that to the blog post where I shared it in the past. Now you can both read and hear it if you wish, at this link.

My poem in last night's open section went over well too, and I have added a Soundcloud recording to that also, if you'd like a read and a listen: here.

I've been featured at an earlier Poets Out Loud (along with another ex-Melburnian, Matt Hetherington) with my full name, but in the open section people are usually introduced just by their first names. So I am becoming known in these circles just as Rosemary, the poet – a whole new career, amongst people who have (mostly) never heard of me before. I love it!

This time the featured reader was yet another poet who has migrated here from Victoria, Nola Firth, whose book, 'Counting on Murwillumbah',  I immediately bought after hearing her readings from it. I also bought SlamCraft: Writing and performance craft of spoken-word poetry by Poets Out Loud founder Sarah Temporal, to share with my writing students. On further reading, I'm delighted with both. 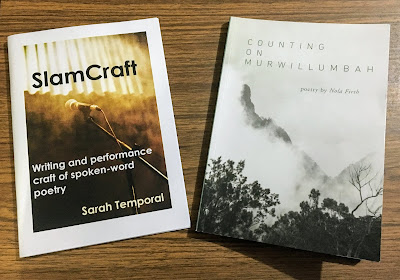 The addition of lovely singing by Eliza, before we started and in the break, and of great food from Bacaro restaurant, made the experience even more sublime. And Eliza's own poem, which she regaled us with later, was a beaut!

We were also told the exciting news that Words Without Fences, which shares the writings of refugees, is becoming active in Murwillumbah.

And I guess the best bit is that there were a number of non-poets in the audience, come to enjoy the show – which they obviously did.

Altogether, I'm in bliss. I've decided – not for the first time – that spoken word poetry is my true spiritual home. 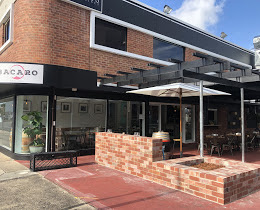 Bacaro Restaurant, behind which (and attached) is the big performance space used for Poets Out Loud.
Labels: Bacaro OCCUPATION POET Poets Out Loud Seen and Unseen (poem) Soundcloud spoken word The Day We Lost the Volkswagen (poem) Volkswagen poem 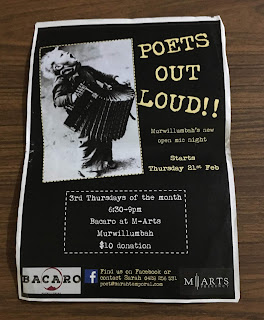 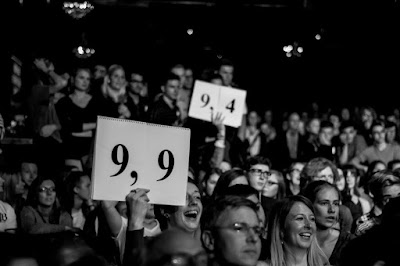 My first ever poetry slam!


Paypal button for the convenience of passing philanthropists.
Or to purchase my books directly, where applicable (see details of individual volumes at Publications tab).